Austria is a country with a very ample and diverse culinary culture. Bavarian, Czech, and Hungarian influences mark their traditional plates, like Wiener Schnitzel or goulash. One of their most delicious customs are the small farm-to-table restaurants in Styria called buschenschanks, .

Located in the south of the country, southwest of Vienna, Styria is a region with a culinary culture that is based on regional foods and wines made by small and family-owned producers. It is the second-largest state in Austria, and its capital, Graz, stands out thanks to its diverse architectural offering and modern and innovative design.

As soon as you leave the city, you’ll find yourself in the surrounding wine region, with its enological tradition and local fare. Though it may not be the Austrian region most known for its wines (less than 10% of all of the country’s wine comes from Styria), the state offers a product whose quality is on the rise.

Perhaps the most enchanting aspect of the region are the buschenschanks, small family-owned restaurants that sell their homemade wines and fresh products of the surrounding lands.

Buschenschanks, From the 18th Century to Today

In 1784, the emperor Joseph II implemented a law that permitted producers of the region to sell their seasonal food, wine, and local products at the price of their choice. This tradition has survived throughout the centuries, which is why you can now enjoy the seasonal culinary fare of Styria at buschenschanks, which are reminiscent of the zero-kilometer and slow food movements. By law, all of the wines that are sold at a buschenschank have to be produced at the locale. Furthermore, hot food cannot be served, as doing so would convert the restaurant into a “heuriger”.

These restaurants only serve fresh foods that are produced on their land, at local farms, or that come from nearby farmers. This system also allows them to avoid paying certain taxes and fees.

The culinary offering at a buschenschank centers around locally produced cheeses, meats, sausages, breads and homemade spreads. You can’t miss out on the sweet dishes either, which are often a variety of traditional desserts made in house.

A Food and Wine Route Around Graz

Aside from being an incredibly charming city, Graz is also the perfect central point to stay when planning a local wine and food route around Styria. If you rent a car, moving around the zone is quite easy, especially if you stay in Lend, a charming and unique neighborhood that offers ample parking options. 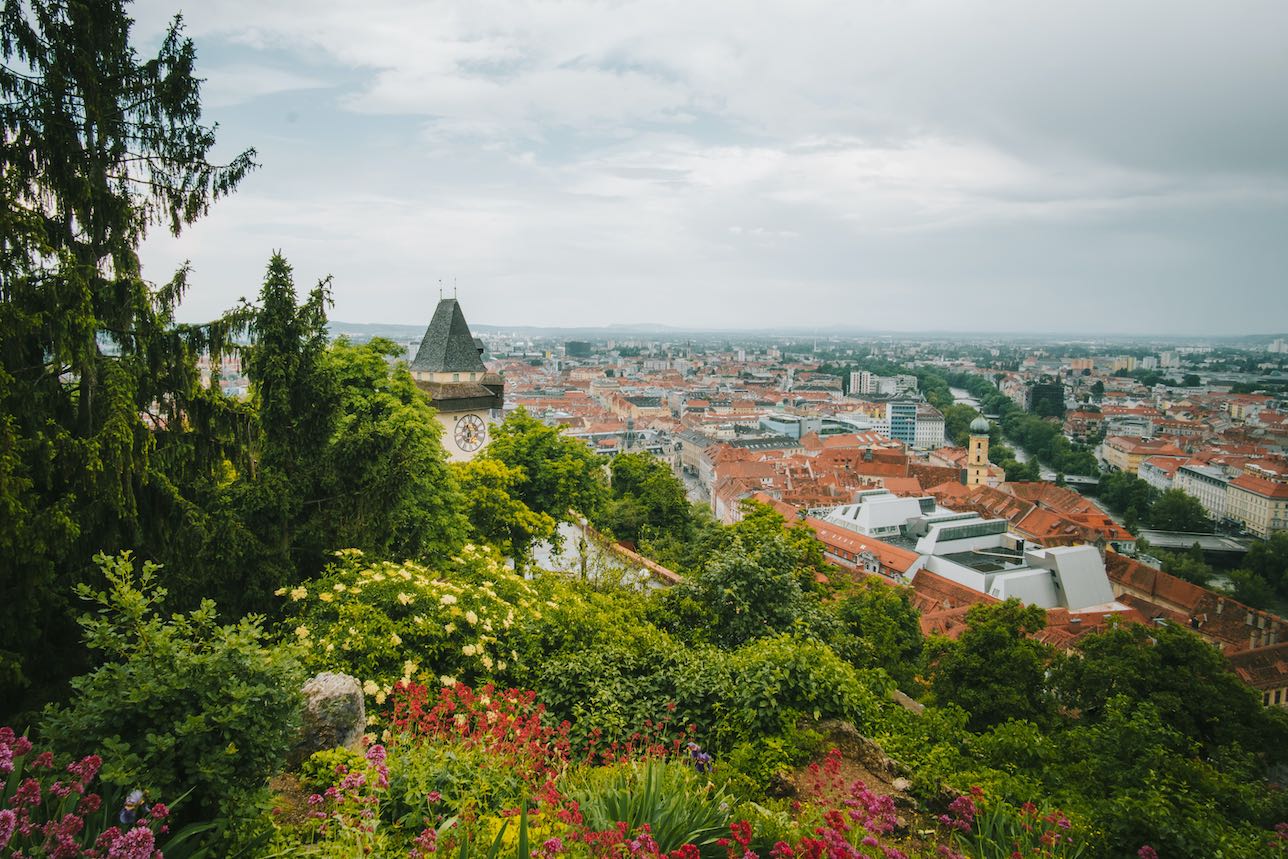 You won’t have to travel too far from Graz to eat well, thanks to the fact that there are plenty of quality buschenschanks on the outskirts of the city. You will only have to drive between 15 and 30 minutes out of the center to find a traditional and seasonal culinary offering.

A visit to an authentic buschenschank is the perfect opportunity to try the freshest and most typical products of the Styria region. To begin, you have to try of the characteristic wines or beverages of the area, like “most” or “sturm”, fermented juices made from grapes, or in the case of “most”, other fruits like pear or apple. And don’t miss out on “uhudler”, an acidic and dry wine, either rose or white, that you can only find around the Styria region. 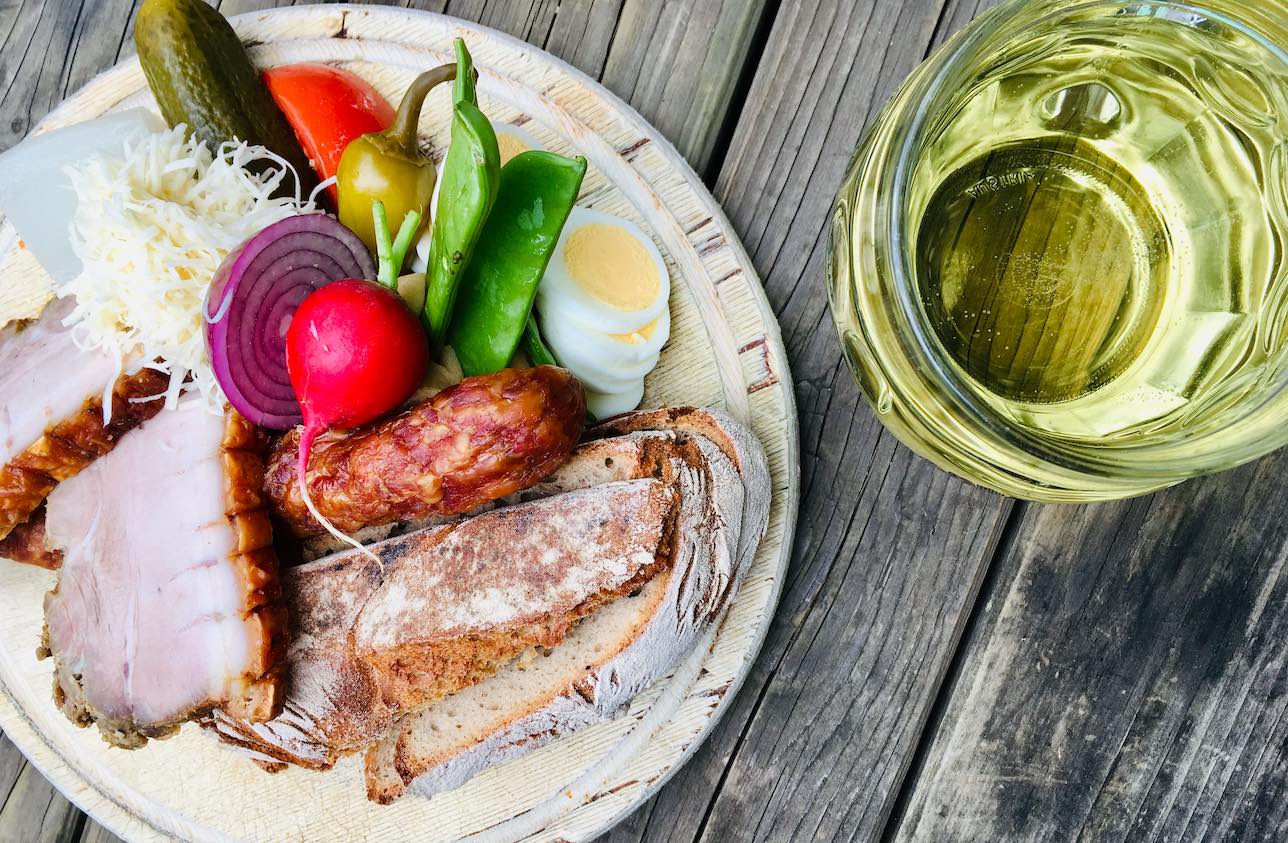 When it comes to the food, the local meats and cheeses are a must, along with fresh-baked bread and delicious spreads. Also very common are horseradish and homemade fermented foods, like pickles. Of course, you must top off your meal with something sweet, and we recommend trying apple strudel or another Austrian dessert.

Given that they rely on seasonal products, buschenschanks aren’t open all year round. Therefore, it’s better to visit around harvest times, like spring, summer, or fall. It is not recommended to visit in winter, since it’s possible that the majority of places are closed. At any rate, it’s always a good idea to call before visiting.

How to Get There?

Graz has an international airport, but there are no direct flights there from Spain. However, there are flights to Vienna. From the Austrian capital to Graz you only have a little over two hours by car and between two and a half and three hours by train.

Find the recipe for baumkuchen, a delicious German cake, here.